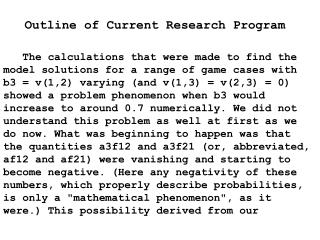 Outline of Current Research Program. The calculations that were made to find the model solutions for a range of game cases with Hidden Markov Model - . cs570 lecture note kaist. this lecture note was made based on the notes of prof. b.k.shin(pukyung

Lesson Objective - Understand what complex number are and how they fit into the mathematical landscape. be able to do