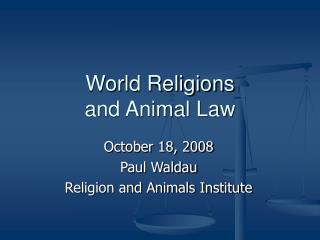 World Religions and Animal Law. October 18, 2008 Paul Waldau Religion and Animals Institute. “The person who understands what I have to say about justice … …understands everything I have to say.” … Meister Eckhart. two basic questions.

Religion and Planet Earth - . lo: to revisit the topic in preparation for the gcse exam. remember to choose 4 out of 6

Jewish Beliefs &amp; Texts - . belief in one god. judaism is one of the oldest monotheist religions (belief of one

The Bill of Rights - . why a bill of rights?. the controversy. constant interpretation evolving society (abortion, gay

Core Beliefs - . judaism. judaism is one of the world’s oldest religions, dating back approximately four thousand

Religion and Human Relationships - . the roles of men and women within a christian family. christian teaching about

Democratic and Human Rights in Australia - . what are human rights?. the basic notion of human rights lies in people's