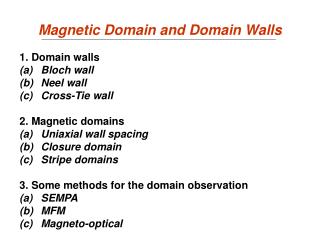 Domain 1: Preliminary Work and Collection of Taxpayer Data - . this domain covers the items that a preparer must consider

CIS 595 Image ENHANCEMENT in the SPATIAL DOMAIN - . dr. rolf lakaemper. most of these slides base on the book digital

What is NLG? - . input formal representation of some information (linguistic or non-linguistic) output single sentences

Chap 4 Image Enhancement in the Frequency Domain - . any periodic function can be expressed as the sum of sines and

Chapter 18: Magnetic Properties - . issues to address. • what are the important magnetic properties ?. • how do we