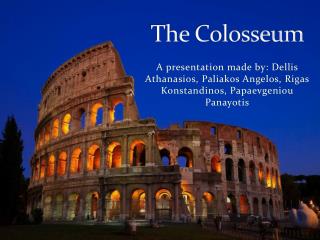 The Colosseum - . alyssa fritz 4th hour latin. overview. location origin of the building importance how it has changed

Italy A to Z - . by: gabriela gutierrez grade 5-esl. a is for alps. the alps are the largest mountains in italy. they

Italy - . by: kaelee fay &amp; robin cooper. italy. italy has many sites and is a very popular tourist site. italy

The Colosseum , One of the Seven Wonders of the World - Capri, 14-17 june 2011. the enhancement, value and viability of

Nominations for new 7 wonders of the world - . the acropolis of athens (450-330 bc),greece. christ the redeemer

Colosseum Rome Tickets - Https://colosseumrometickets.com/ the roman colosseum is the top on the list of should see