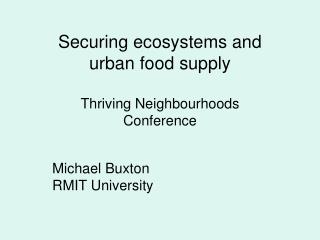 Chapter 4 Ecosystems: What Are They and How Do They Work? - . © brooks/cole publishing company / itp. key concepts.

Mono Lake Food Webs - . investigation 4. what are ecosystems?. an ecosystem is the interaction between the biotic and

Ecosystems &amp; Communities: Organisms and their Environments - . ecosystems have living and non-living components.

The Agricultural World - . the human matrix chapter 3. introduction. importance of agriculture all humans depend on

Securing Access in a Heterogeneous Network Environment - . providing interoperability between microsoft windows 2000 and

Ecosystems - . what do you know about ecosystems?. take a moment! write down or draw everything that you can think of