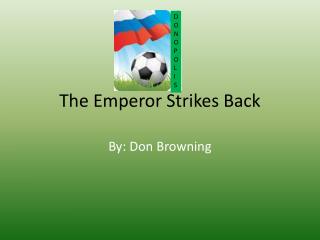 The Emperor Strikes Back

D O N O P O L I S. The Emperor Strikes Back. By: Don Browning. Empire and Emperor. My Empire’s name is Donopolis It is named after the Emperor. The Emperor is Don the Greatest 320,000 Citizens live in Donopolis. Brutal Force Government. My kingdom is ruled with brutal force.

The Emperor Strikes Back

Sign of the Chrysanthemum by Katherine Paterson - . day 8 discuss chapters 16-18. question 1. how does muna live after

Foundations of Christianity - . growth in the first century. scattered cult after crucifixion barely had 100 members by

Ancient Rome: The Rise of Christianity - . world history. entering a time of peace. under julius caesar, rome became an

Star wars quiz - . can you name these characters???. a long time ago, in a galaxy far far away… (click to start). who

Emperor Wilhelm II 1888 – 1918 House of Hohenzollern - . the proclamation of the german republic by philip scheidemann

Star wars The life and legend of Obi-one-Kenobi - . by: ryder windham. main character and detailed description. the main

The British empire - . an introduction. do now. take out a piece of lined paper. write your name at the top. in 6 lines

Star Wars: Death Troopers - . author: joe schreiber by francisco campa . a long time ago in a galaxy far far away…. it

Star Wars Episode 5 - The empire strikes back. star wars episode 5. types of government. the rebel alliance is the

The Holy Roman Empire and the Church - . section 8-2 pp. 251-254. preview questions. why did holy roman emperors fail to

The Rise of the Roman Catholic Church - . dark ages: the rise of christianity. the word catholic derives from the middle