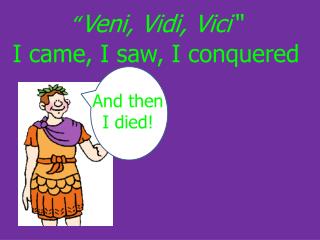 “ Veni, Vidi, Vici“ I came, I saw, I conquered. And then I died!. Marc Antony. Friend of Julius Caesar Took control when Caesar died Called Senate into session Asked for conspirators to be pardoned Brutus and Cassius Public funeral for Caesar Read Caesar’s will at funeral Escape From Kraznir - . learning objective: to explore the fantasy genre. to extend a story using a variety of writing

Who were the Aryans? - . the term ‘aryan’. derived from the ancient indian language sanskrit for ‘noble’:

Early American Quiz Show - . (or, what you need to know for the test.). who were the spanish explorers who conquered

Timeline - . holocaust. long before jews came to europe, they lived in the jewish kingdom of judea, now part of israel.

8:38 Worship - . my redeemer lives. i know he rescued my soul his blood has covered my sin. i believe. i believe! my