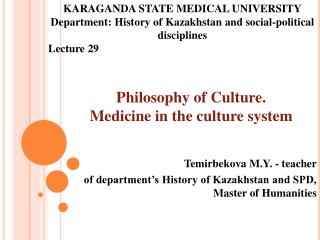 Phenomenon of philosophy in East culture. Philosophy and medicine of ancient India - . temirbekova m.y. - teacher of

CSIRT Philosophy and Culture - What is csirt?. computer emergency response team is a name given to expert groups that

Traditional Chinese Philosophy and Culture - . an introduction course. the importance of tcc. two purposes of learning a

of Culture - . arrfleps. a look at the eight factors involved in forming a culture. culture . the total of knowledge,

of Culture - . abc's. a look at the factors that create cultures. culture . the beliefs and actions that define a

Preservation of Culture in - . shamsul a.b. national university of malaysia. an internetworked world. a paper for the

CULTURE IN THE CLASSROOM - . writing that honors where students come from and who they are sara jones. culture

Culture in the Classroom - . why this module? how is it set up? love at first sight? experiencing the dutch your cultural

Culture in the 1930s - . 23.4. main idea. motion pictures, radio, art and literature blossomed during the new deal. why