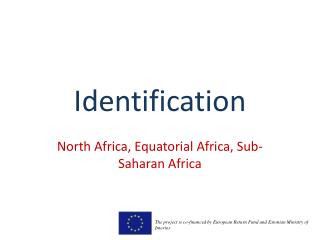 Identification. North Africa, Equatorial Africa, Sub-Saharan Africa. The project is co-financed by European Return Fund and Estonian Ministry of Interior. Africa. Algeria cooperation with the Embassy of the People’s Democratic Republic of Algeria in Warsaw. 2012 – 6 applications Identification - . why do people wear clothes #3 . identification. clothes has always been useful in identifying certain

Identification - . contractual. physical. electronic. reporting. click on each folder tab to learn how it acts as an ip

Identification - . the word &quot;afghan&quot; historically has been used to designate the members of an ethnic

Opportunity Identification - . chapter 3. what is an opportunity?. idea for a new product product description in