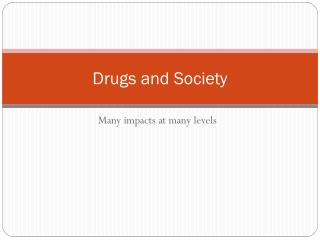 Drugs and Society. Many impacts at many levels. How much does it cost?. According to the NIDA substance abuse costs the nation a half a trillion dollars each year. That’s $500,000,000,000. DRUGS AND OUR SOCIETY - . health. what is a drug? how does it enter the body?. drug- chemical that causes changes in the

Drugs and Our Society - Amphetamines . amphetamines have played an important role in our society since first being

Overview of Drugs in Our Society - . what role do drugs play in our society- what’s the impact?. is there a ‘drug

Drugs in American Society Erich Goode - . how do we know it’s true? methods of research. prepared by james roberts

The Value of Innovative Drugs Benefits to Patients and Society - . . . . key questions. are americans spending too much

Medicines and drugs - . stimulants. stimulants. nicotine, caffeine, amphetamines the intention of these drugs is to have