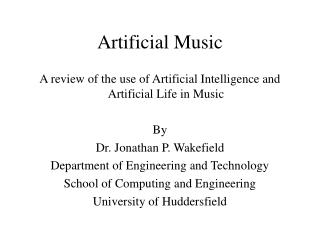 Artificial Music. A review of the use of Artificial Intelligence and Artificial Life in Music By Dr. Jonathan P. Wakefield Department of Engineering and Technology School of Computing and Engineering University of Huddersfield. Brainwaves.

Thank you for the music - . is music important in your life? what’s your favourite type of music? how many different

EMI: Experiments in Musical Intelligence - . one man’s dream to create new works from the composers who are

Music Perception and Cognition - 2009-2010 perfecto herrera perfecto.herrera@upf.edu about perfe member of the mtg since