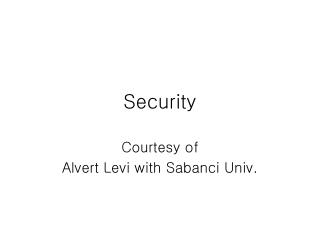 Security. Courtesy of Alvert Levi with Sabanci Univ. Terminology. Computer Security automated tools and mechanisms to protect data in a computer, even if the computers are connected to a network against hackers (intrusion) against viruses against Denial of Service attacks

Security - . chapter 8. security. security in distributed system can be divided into two parts: a secure channel is a

COM 360 - . chapter 8. network security. need for security. motivation: why do we need security ? increased reliance on

Security - . 9.1 the security environment 9.2 basics of cryptography 9.3 user authentication 9.4 attacks from inside the

System i Security Products - . agenda. security issues regarding system i who is powertech? customer requirements system