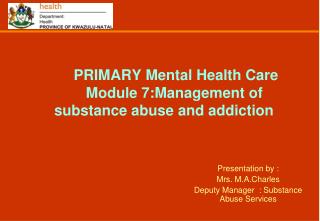 Addiction Has Bad Effect on Mental Health - Mental illness & addiction are mostly interlinked because there is fact.

Substance Abuse and Addiction - . david b. sarwer, ph.d. associate professor of psychology departments of psychiatry and

Treatment and Prevention of Substance Use Disorders - . lecture overview nature and treatment of alcoholism tobacco

Drug Addiction - At present there are many misconceptions about drug addiction, and these can lead to problems for both

Young adults and dual diagnosis – When mental health intersects with addiction - . what is a mental illness. a mental

culture and addiction - . &quot;i hate to advocate drugs, alcohol, violence, or insanity to anyone, but they've