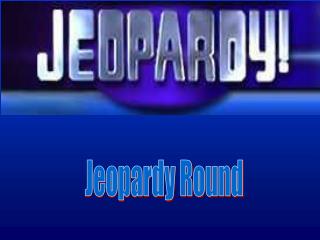 BB4M0 Jeopardy Round 2 - . choose a category. you will be given the answer. you must give the correct question. click to

JEOPARDY - . stargirl. jeopardy rules. you may not buzz in until i have finished reading the question on the screen after

Arcs and Circles Jeopardy - . you must record each question and answer on a separate sheet of paper each group will have

JEOPARDY – River Valleys – Round 2 - . geography 200. the nile river empties into this body of water. what is the

Watson: The Jeopardy! Machine - . robin sturm. who is watson?. this is watson! (his “face” at least). this is also

Jeopardy! Round - . daily double: jeopardy! round. how much will you wager?. codenames 200. this company’s portable