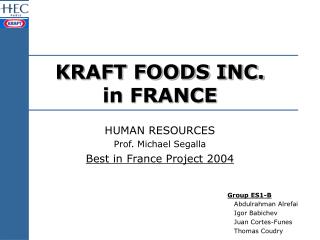 France - . by sadie gerber. languages. the main language is french. the other languages are alsatian, breton and basque.

Sales Analyst Trainee, Bosnia (f/m) - About the company kraft foods international is one of the leading global players in

GM FOODS - . aly 7bb. introduction. what is gm foods ? gm foods are modified so that they can have more protection and

Why fast foods are bad for you? - Fast foods often contains high amount of fat, sugar, sodium and calories. regular