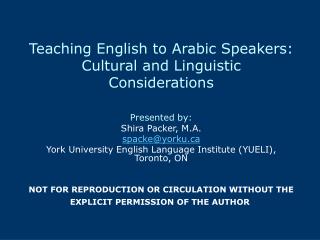 Teaching English to Arabic Speakers: Cultural and Linguistic Considerations. Presented by: Shira Packer, M.A. spacke@yorku.ca York University English Language Institute (YUELI), Toronto, ON NOT FOR REPRODUCTION OR CIRCULATION WITHOUT THE EXPLICIT PERMISSION OF THE AUTHOR . Introduction to the Arabic Alphabet - Key differences from english. arabic is written from right to leftthere are no

Cultural issues in Psychotherapy - . cultural considerations in the teaching and evaluation of psychotherapy major

The Cultural Contexts of Teaching and Learning - . stuart greene associate professor of english director of education,

Teaching With Diversity - . abby freeman and racquel parra. journal entry. how do your personal beliefs and your