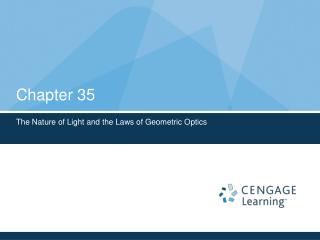 Chapter 35. The Nature of Light and the Laws of Geometric Optics. Introduction to Light. Light is basic to almost all life on Earth. Light is a form of electromagnetic radiation. Light represents energy transfer from the source to the observer. CHAPTER 35 - . plant structure and growth. plants are the first link in the food chain through photosynthesis . this

Chapter 35 - . a time of ferment imperialism and politics 1901–1916. america’s colonies. annexing the philippines

Chapter 35 - . an age of anxiety. era of innovation. “the lost generation” (gertrude stein) disillusionment after

Chapter 35 - . section 1 molluska. characteristics of mollusks. some are filter-feeders while others are fast-moving