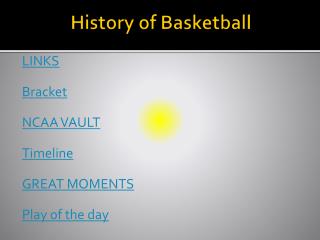 History Of Basketball - . inventor of basketball. dr. james naismith was born in 1861 in ramsay township. the concept of

The Cultural Significance and Early History of Basketball - . origins and unique features of america’s

History and Rules of The NBA Basketball Court - . tyler mcgaughy 10-22-2012. origins of the game. the game of basketball