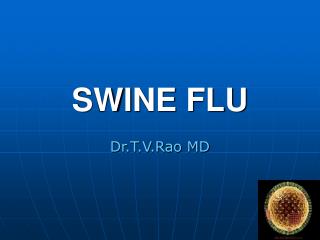 Swine is identified as an important communicable disease, Early diagnosis and treatment can reduce morbidity and mortality associated with infection

How to Avoid Swine flu (H1N1) With Healthy Foods - Swine flu, donâ€™t scare too much!!!! ayurveda is the best

Swine flu - . etiology. influenza virus is an orthomyxovirus. this type of virus is divided into three groups; type a,

Swine flu instructions - . if you have a fever of 100 degrees or more, cough, sore throat, body aches, headache, chills,

SWINE FLU - . what you need to know to help protect yourself and your students from this potentially fatal h1n1 virus.

Swine Flu - . swine influenza what is it?. what is swine flu? a respiratory disease of pigs caused by type a influenza

SWINE FLU and ITS PROTECTION - . how much are we educated about h1n1 flu? by zuzana jakubcin. history of the swine

SWINE FLU - . what is swine flu?. swine influenza (swine flu) is a respiratory disease of type a influenza viruses that