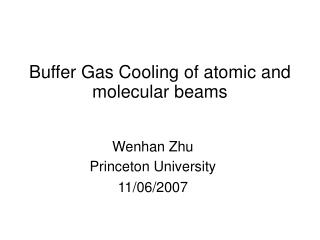 Wenhan Zhu Princeton University 11/06/2007. Buffer Gas Cooling of atomic and molecular beams. Basic idea. The technique relies on thermalization of the species-to-be-trapped via collisions with a cold buffer gas, which serves to dissipate the translational energy of the atoms or molecules. Atomic and Molecular Orbitals - . recall the following principles from general chemistry. the horizontal rows of the

Atomic and Molecular Orbitals - . structure and properties of organic molecules. electrons act as both particles and

The Radial Profiles of Gas, Gas Metallicity and SFR in the SAMs for Molecular and Atomic Gas - . fu jian max planck

Atomic, Molecular and Optical Physics - . laser and accelerator based studies of ions, atoms and simple molecules for the

Atomic/molecular collisions and pressure - . the kinetic-molecular theory relates pressure to elastic collisions between

Interface to Gas and Cooling - . interfacing gas / cooling. questions were raised on how to interface to the detector gas