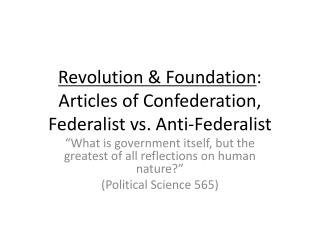 Government Unit 1 : Review - . government warm-up. recall and list some of the weaknesses of the articles of

The Critical Period: 1781-1787 - . articles of confederation. unicameral legislature no executive no national judicial

Units 11-20: The Newtonian Revolution and the Discovery of Natural Law - . ptolemy vs. copernicus: earth in a natural

The American Revolution - . the american revolution. the colonies were generally unprepared for war. unformed nation 1/3