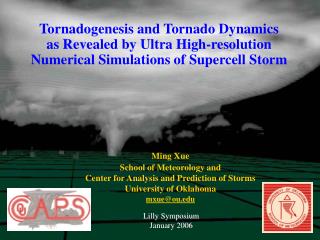 Center for Analysis and Prediction of Storms (CAPS) University of Oklahoma - . caps is one of the first 11 nsf science

Evolution of the cloud droplet size distribution under the effect of turbulence - . charmaine franklin bureau of

THANK YOU TO OUR SPONSORS - . ou school of meteorology weathernews chair. dr. frederick and mrs. meg carr. 25 years of

The Analysis of Convective Storms - . thermodynamic diagrams. there are three desirable characteristics of atmospheric