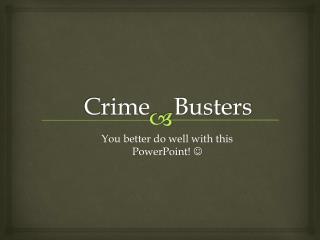 Fingerprints - . objectives. you will understand: why fingerprints are individual evidence. why there may be no

BOREDOM BUSTERS - . breaking the bonds of boredom. everyone is bored… sometime boredom is….. boring. boredom is….

Chapter 3 Crime and Social Control - . “unjust social arrangements are themselves a kind of extortion, even