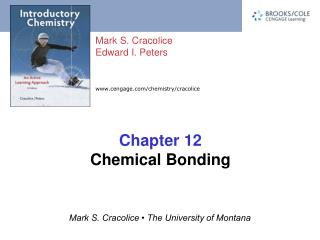 Chapter 12 Chemical Bonding II - . i. bonding theory a covalent h-h bond is the net result of attractive and repulsive

Unit 4 - Bonding and Compounds - Chapters 5 and 12 - . chemical formula - a combination of symbols that represents the

Chemistry 11 Chemical Bonding - . electronegativity – the tendency of an atom to attract electrons from a neighbouring

CHAPTER 12 – CHEMICAL BONDING - . chemical bond – a force that holds two or more atoms together as a unit individual

Chapter 12 Covalent Bonding - . many substances in nature are molecular. molecules are composed of atoms combined

Chapter 11 Chemical Bonds - . objectives. 11.1 describe how a compound differs from the elements that compose it 11.1

chapter 12 chemical bonding - . essentially everything we see around us, natural or man-made, compounds or elements, has