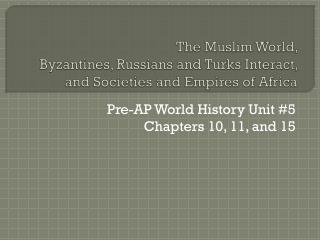 The Muslim World, Byzantines, Russians and Turks Interact, and Societies and Empires of Africa

The Muslim World, Byzantines, Russians and Turks Interact, and Societies and Empires of Africa

The Gunpowder Empires - . the ottomans, safavids, and mughals. the ottomans. originally a nomadic people from the north

Empires of the Fertile Crescent - . * the movement of people across the fertile crescent resulted in the change of

Portuguese Empire circa 1500 - . what places do you see on this map? what explorers were important in accomplishing

The Mongols - . the mongols were nomadic people from the steppe, they conquered and settled across asia built largest