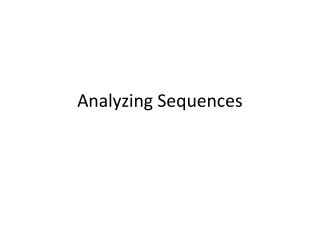 Analyzing Sequences. Sequences: An Evolutionary Perspective. Evolution occurs through a set of modifications to the DNA These modifications include point mutations, insertions, deletions, and rearrangements SEQUENCES - . a sequence is a function whose domain in the set of positive integers. so if you have a function but

Sequences - . what is sequence?. a sequence is an ordered collection of objects. we use sequences to model collections in

SEQUENCES - . learning objectives. generate terms of a simple sequence, given a rule, finding a term from the previous

Sequences - . sunday, 05 january 2020. a sequence is a list of numbers. there is usually some rule that connects these