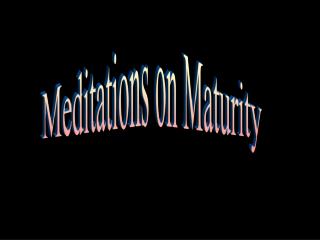 Meditations on Maturity. Based on the teachings of. Founder Acharya:. His Divine Grace. A.C. Bhaktivedanta Swami Prabhupada. International Society for Krishna Consciousness. Image of Krishna. Animals not made in Krishna’s image Tailored shirt Human form unique Become Godly, not God The Holy Rosary Novena With Scriptural Meditations The Sorrowful Mysteries Tuesdays and Fridays - . in the name of the

Developmental Milestones-An overview - . illingworth 1987. development is continuous from conception to maturity and its

Apostles, Prophets, Ambassadors and Angels - De la salle’s meditations for the time of retreat and the apostolic