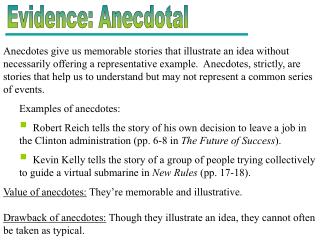 Evidence: Anecdotal. Anecdotes give us memorable stories that illustrate an idea without necessarily offering a representative example. Anecdotes, strictly, are stories that help us to understand but may not represent a common series of events. Examples of anecdotes: Anecdotal records - . what is an anecdote?. the term “anecdote” means a short narrative or story it is told or

How to Make Recommendations for Using Organic Products: Research and Anecdotal Evidence - . jeanine davis department of

Evidence - . the presentation of evidence. evidence presented by both the crown and the defence must be presented in the

Evidence - . what is it? how do i use it? how can it help me? a training prepared by the pera workgroup fall 2013. pera

Evidence - . arguments consist of conclusions. developed by reasons supported by evidence whose significance is

EVIDENCE - Educational policy and the social backgrounds of teachers and pupils have major impacts. we, though, place a