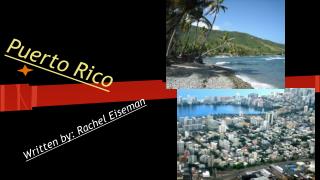 Unit 1: What Makes Puerto Rico Unique ? - . flag. our spanish heritage is reflected in the language and our people of

Puerto Rico - . by anni kristen watson. history of puerto rico. life before discovery. before the discovery of puerto

Culture of Puerto Rico - By: brittany williams lakeisha moore. culture of puerto rico. puerto rico is an island in the

PUERTO RICO - . by imani. can you imagine living in a place where it never snows? i can because my dad told me that his