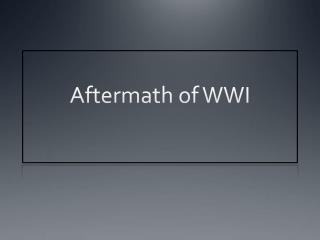 Aftermath of WWI Italy - . by: rob, robb(jon), and robbie. postwar settlements. italy was left out of major decision

The End of WWI, and the Treaty of Versailles - . m. diluccio. events of 1917. america joins the war with the allies

Treaty of Versailles and WWI Treaties - . objectives : 1) demonstrate an understanding of the similarities and

World War I - . causes of wwi. militarism : power to military leaders alliances : tied nations to each other imperialism

Totalitarianism after WWI - . aftermath of world war i. europe was burdened by war debts. had to face the tough task of

The Rise of the Dictators - . treaty of versailles. terms of treaty germany was blamed for world war i. germany to

THE AFTERMATH OF THE REBELLIONS - . looking at the military results paints a misleading picture britain shocked by revolt

Chapter 23 World War II ERUPTS - . the rise of dictators (23.1). the main idea the shattering effects of world war i

Aftermath Of WWI - . do now . define:. demobilization-to disband reparation- the making of amends for wrong or injury

The Korean War and its Aftermath - . by adam eudy and david go. background. wwii korea under japanese rule (1910-1945)

WWI Aftermath - . peace and consequences. wwi also known as the “great war” and “the war to end all wars”.