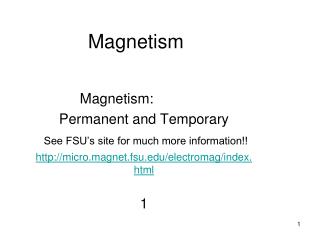 ELECTRICITY &amp; MAGNETISM - . magnetism. invisible force of “push” or “pull” by an object with this

Today: Chapter 24 : Magnetism - . please pick up your second midterm from the front of the class if you haven’t

Why is there Magnetism? - . einstein gave the answer: electricity + motion = magnetism. from two points of view: lorentz

MAGNETISM - . materials. only iron, steel, nickel and cobalt are magnetic. bar magnets have to be made using one of these

Electricity &amp; Magnetism - . what is magnetism ? magnetism is the properties and interactions of