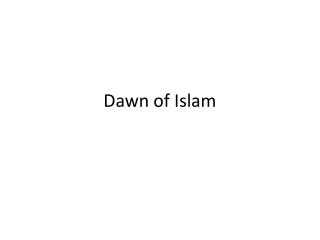 Dawn of Islam. Before Muhammad. Arab tribes not unified, divided by clan rivalry Bedouins were nomadic, shunned civilization oases few and far between in Hijaz , a few settled in Mecca and Medina

ISLAM - . sswh5 the student will trace the origins and expansion of the islamic world between 600 ce and 1300 ce. a.

ISLAM - . by alfee baker. history. islam began in mecca, arabia and was created by the prophet muhammad. muslims believe

Islam - . five pillars of islamic faith. profess and say publically, “there is one god, allah and muhammad is his

Muhammad and the rise of Islam - . nomadic tribes. arabian tribes nomadic never settled in one spot few areas near water

I. Arabia Before the Prophet II. Muhammad, Prophet of Islam III. Islamic Faith and Law - Iv. the expansion of community

Islam - . by shenay , arjeta , brooke &amp; andrew :). what are some of the major beliefs of the religion of i

ISLAM - . birth of islam. muhammad “praised one” born in mecca went to desert to pray angel spoke to him. islam