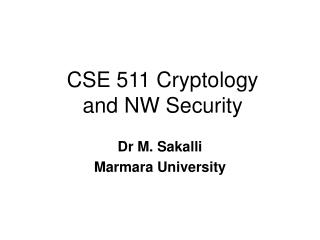 CSE 511 Cryptology and NW Security. Dr M. Sakalli Marmara University. As quoted in the lecture slides by Lawrie Brown, and site: http://williamstallings.com/Crypto3e.html , in chapter 1 of Introduction.

Safety and Security in Malls - . problem. what is safety and security? what do they use? what the jobs consist? go over