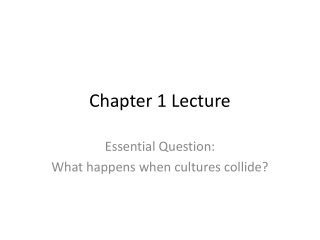 Chapter 1 Lecture. Essential Question: What happens when cultures collide?. The Big Idea. Everything you learn in class will be organized under an essential question – the big idea. As you read chapter 1 and watch this PowerPoint, consider the essential question from the first slide. Chapter 1 Lecture - . essential question: what happens when cultures collide?. the big idea. everything you learn in

Lecture Chapter 1 - Sales discounts and returns and allowances are contra revenue accounts. ... prepare and prove the

Chapter 4 Lecture 1 - . tax planning and strategies. why understand taxes?. knowledge of the tax laws can help you:

Chapter 1 lecture notes - Or is curriculum, the expected ends of education, such as the intended learning outcomes? ...

Chapter 1 Lecture Notes - . physical science. what is the correct missing element?. can you rule the planet?. lets play

Chapter 16 Lecture 1 Buffers - . the common ion effect addition of a salt containing the conjugate base (acid) to a