AWAY TO GERMANY - PowerPoint PPT Presentation 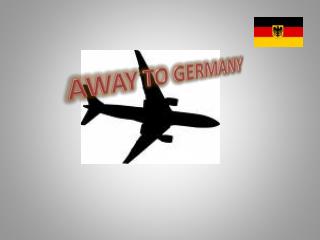 From Versailles to Pearl Harbor - . an overview of events that occurred in europe during the 1930’s. germany faces

The World at War AGAIN! - . unsuccessful. provisions for a safer world as set forth in the treaty of paris at the end of

Modern Germany - . lecture 3: politics, culture, and society in bismarckian germany (1871-1890). burschenshaften and the

„Alemannia Judaica“ - Details about the history and internet presentation of an important research group.

The Cold War Begins - . ideological differences between the united states and the soviet union. by april 1945 soviet and

Bell Ringer - What was the change during the russian revolution?. explain why germany was angry after wwi. the treaty of