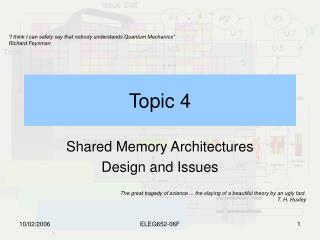 “I think I can safely say that nobody understands Quantum Mechanics” Richard Feynman. Topic 4. Shared Memory Architectures Design and Issues. The great tragedy of science ... the slaying of a beautiful theory by an ugly fact. T. H. Huxley. Reading List. Slides: Topic 4x Topic 4 - . statistical inference: confidence intervals. parameter and statistic. a parameter is a number that describes

Topic 4 - . periodicity –  the tendencies of certain elemental characteristics to increase or decrease as one

TOPIC 4 - . civil resistance in south africa 1970s to 1980s what was the nature of the civil society resistance after the

TOPIC 4 - . monetary economics. money. in the ancient time, where money is not yet introduced,. transactions were done by

Topic 4 - . marketing marketing planning. learning objectives. to know what a marketing mix is explain the value of a

Topic 4 - . periodic functions &amp; applications ii definition of a radian and its relationship with degrees

Topic 4 - . timbre representations. we often say…. “that singer’s voice is magnetic ” “the violinist’s