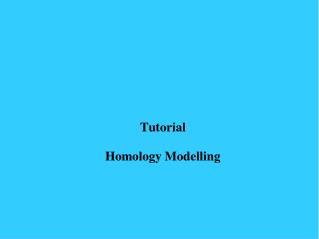 HOMOLOGY MODELLING - . chris wilton. homology modelling. what is it and why do we need it? principles of modelling,

Homework Homology Modelling - . it is really easy. just start and take some time. why homework? just to help you. the

Homology modelling of cell-envelope proteinase - . engineering of the substrate binding region of the subtilisin-like,

Homology - . homology review. which of the following structures are homologous?. definition: structures (including genes)

Applications of Homology Modeling - . hanka venselaar. this seminar…. homology modeling… why? what? when? how? and a