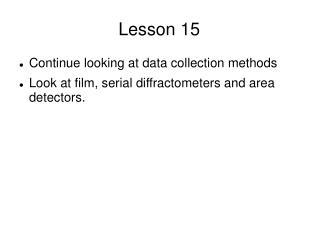 Lesson 15. Continue looking at data collection methods Look at film, serial diffractometers and area detectors. Submitting Crystals. You can bring your crystals to the lab in three different ways 1. Dry 2. In the mother liquor 3. In a protecting liquid such as Paratone-N LESSON 15 - . overview of previous lesson(s). over view. strategies that have been used to implement and optimize pattern

Lesson 15 - . no signpost in the sea. questions:. what is the general function of a “signposts”? what is the special

Lesson 15 - . quit. the teacher asked the students to quit talking in class . quick. . rick is a quick runner. arm. the

LESSON 15 - . the christian and the means of grace. opening prayer. for christian homes, o lord, we pray, that you might

Lesson 15 - . inheritance, polymorphism, and virtual functions. what is inheritance?. provides a way to create a new