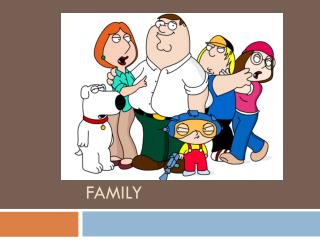 FAMILY. What is a family?. A group of people who are related by marriage, blood, or adoption and who often live together and share economic resources. It is the most universal institution because every society organizes its members into families. FAMILY-TO-FAMILY INTRANET - . what is f2f intranet?. an internal site within nami’s website. created as a technical

Family and Family Relationship - . have you got a brother?. brothers/sisters play with each other (don’t ) get on

Family Systems, Family Lives - . the family. institution: maintains patterns of privilege and inequity and is connected

Family - My world. traditions. family. hobbies. friends. pets. likes and dislikes. my world is all i like and dislike,

Family - What is family?. collection of individualsrelated by blood, marriage, adoptiontied to each other with some

Family - . &quot;the bond that links your true family is not one of blood, but of respect and joy in each other's

FAMILY - Food storage. the temperature in the refrigerator should be between 34 and 40 degrees f (optimum temperature is