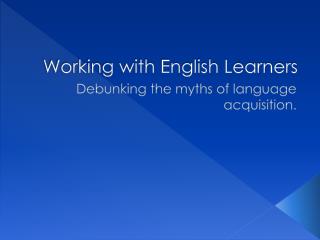 Working with English Learners. Debunking the myths of language acquisition. . This is Mabou Loiseau . She speaks seven languages fluently. Which ones do you hear ?. Which one is her native language?. Listen closely. Can you tell?. Does it matter?.

Advancing the language and literacy of English Learners in an era of the Common Core Standards - . laurie olsen, ph.d.

LAW AND RESEARCH IN REGARDS TO STUDENTS WHO ARE ENGLISH LANGUAGE LEARNERS - . dr. criselda guajardo alvarado