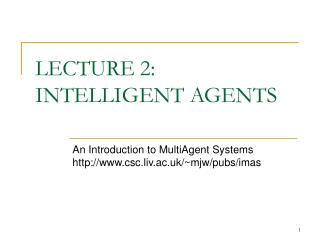 LECTURE 2: INTELLIGENT AGENTS. An Introduction to MultiAgent Systems http://www.csc.liv.ac.uk/~mjw/pubs/imas. What is an Agent?. The main point about agents is they are autonomous : capable of acting independently, exhibiting control over their internal state

Introduction to Artificial Intelligence LECTURE 2 : Intelligent Agents - . what is an intelligent agent? structure of

Introduction to Artificial Intelligence LECTURE 1: Introduction - . what is ai? foundations of ai the history of ai state

Intelligent Agents - . russell and norvig: 2. agents. agent – perceives the environment through sensors and acts on it

Intelligent Agents - . agent: anything that can be viewed as… perceiving its environment through sensors acting upon

INTELLIGENT AGENTS - . yılmaz kiliÇaslan. definitions. an agent is anything that can be viewed as perceiving its