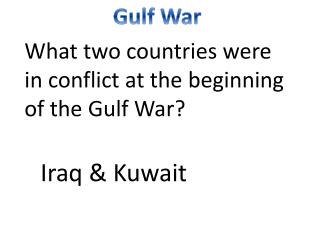 Gulf War. What two countries were in conflict at the beginning of the Gulf War?. Iraq & Kuwait. Gulf War. What was the main reason Iraq felt the need to attack Kuwait?. Thought Kuwait was stealing oil on the border. Gulf War. GULF WAR - . by tom rader. background. iraq was debt ridden from the iraq-iran war iraq claimed that kuwait was

Gulf War II: - . oil or empire?. official view on role of oil. bush spokesman ari fleisher: “the only interest the

The Gulf War - A look back at operation desert storm, where u.s. armed forces lead by general norman schwarzkopf fought

First Gulf War - . saddam hussein declared that the invasion was a response to overproduction of oil in