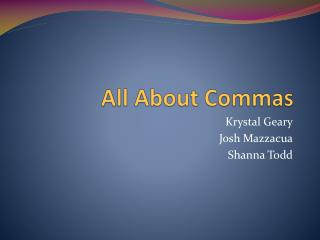 All About Commas. Krystal Geary Josh Mazzacua Shanna Todd. What is the purpose of commas?. Commas are used to add details to a sentence and to separate the structural elements of sentences into manageable segments to avoid misreading. Commas In Compound Sentences.