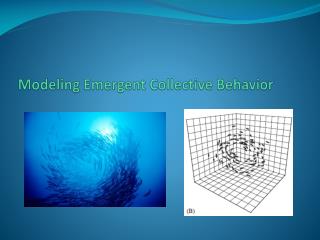 Modeling Emergent Collective Behavior. We now interrupt this broadcast for breaking news…. Three Behavioral Zones. Zone of repulsion Zone of orientation Zone of attraction Blind Region. a. Adapted from Inada, 2002. The Logic of the Model.

Modeling Biosystems - . mathematical models are tools that biomedical engineers use to predict the behavior of the

Collective Behavior and Social Change Chapter 18 - . after studying this chapter, you should be able to do the

Emergent Behavior in Biological Swarms - . stephen motter. the papers. the self-organizing exploratory pattern of the