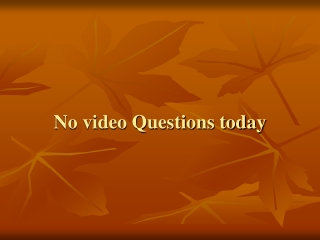 Video Questions - . why is amarna considered to be one of the most puzzling sites in all of egypt? how did akhenaten

NO PASSES TODAY!  - . what are some s igns you’re hanging with the wrong crowd?. 1.  they say you don’t have what

No 3C’s today - . agenda: review game stop by after school if you have questions on your review sheet you want me to go

No bellwork today! - . you have the first five minutes of class to meet with your group &amp; finish your preparation

No Warmup Today - . today we will review atoms/ions and learn about radioactivity test on friday will be about atoms,

Any Questions today? - . the other boleyn girl. what was your impression of the movie? what happens in the movie? how did

No journal today!!! - . time and health are two precious assets that we don't recognize and appreciate until they have

NO DOL TODAY - . be ready to take the parallel structure quiz once the bell rings. place your paine chart face down on

No RP today. - No rp today. have your pencil ready and be in your seat when the bell rings. today in science ! ! !. begin

No bellwork today! - . get out your salmon colored worksheet on the yalta and potsdam conferences. take a few minutes

Today s Questions - Today's questions. how well are your students getting them?are your graduates successful

Questions for Today - . 1. what exactly does bourdieu mean by habitus ? 2. what problems does the concept of habitus

Holocaust: Video Questions - . in the 1940s, who was driven out of their neighborhoods and homes? what is the holocaust?

Tucker Video Questions - . 1. what part of the environment, etc. did tucker do a good job with while developing his

Yes/No Questions - . lesson objective : “yes” and “no” questions are very common in the english language. it’s

Yes/no questions - . phase 5 practising reading sentences. yes. no. could you carry an elephant on your head?. yes. no.

Yes/No Questions - . yes/no questions require the inversion of subject and auxiliary verb. ex: he is taking the quiz. is

yes/no questions - . can a clock get cross? can a crab clap hands? can a shark jump up a tree? can frogs swim in ponds?