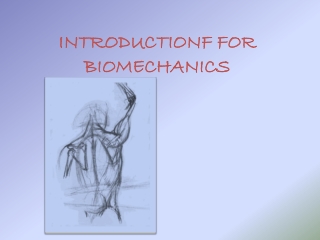 INTRODUCTIONF FOR BIOMECHANICS. When we study any part of knowledge we ask ourselves these questions. What Is the application of mechanical principles on the living organisms. Why Via this science we able to solve many medical problems that face the patients How Introduction to Biomechanics - Biomechanics what is it?. the mechanical bases of biological systems.the application of

Biomechanics 2015 - . section 1:1 an introduction to biomechanics dr. moira mcpherson, school of kinesiology . an

1.2 Anatomy, Biomechanics and Physiology - . how the body responds to exercise. anatomy. anatomy: the structure and