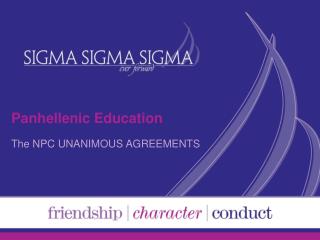 NPC - . np-complete problems. we can solve any problem(!)(?). … but perhaps not with a computer! some problems are not

National Panhellenic Conference - . officially formed in 1988, but greek life women had been gathering as early as 1891

Junior Panhellenic Council - . 2014. what is junior panhel ?. a small group of freshmen from different panhellenic

Building Panhellenic Spirit - . what every collegiate woman needs to know about the national panhellenic conference