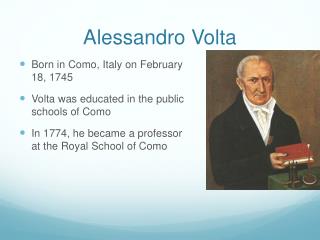 Alessandro Volta. Born in Como, Italy on February 18, 1745 Volta was educated in the public schools of Como In 1774, he became a professor at the Royal School of Como. While teaching, Volta made his first invention, the electrophorus: a device that produced static electricity. Alessandro Cunsolo - On the new opportunities opened by the development of next generation ixs spectrometers. alessandro