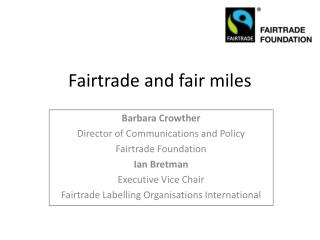 Fairtrade - . by john and ellie. where can you buy fairtrade products

Divine and Fairtrade - . an assembly for secondary school. look for products with this mark . comfort kumeah. image:

Fairtrade - . squeezed. crushed. and that’s just the farmers!. before you finish eating breakfast in the morning,

Fairtrade - . fairtrade is a charity which makes sure that farmers in poorer countries are paid enough for the food they

FAIRTRADE challenge - . click on the buttons to choose your answers. when is fairtrade fortnight?. two weeks in november

FAIRTRADE challenge - . click on the buttons to choose your answers. when is fairtrade fortnight?. two weeks in

FAIRTRADE CERTIFICATION - . guaranteeing a better deal for producers and workers. who we are and what we do. the mission

Fairtrade coffee - Garraways are one of the few manufacturers who genuinely source, import, roast and blend the worlds

Fairtrade Foundation - . the story of justino peck or how the first fairtrade chocolate came to the uk. commodity prices

Fairtrade Schools - . an enquiry based approach. fairtrade schools: an overview fairtrade in the classroom a

FAIRTRADE; about - The fairtrade foundation is the independent non-profit organisation that licenses use of the

FAIRTRADE FORTNIGHT 2012 - . learning objectives to know what problems farmers and producers experience in ledcs to