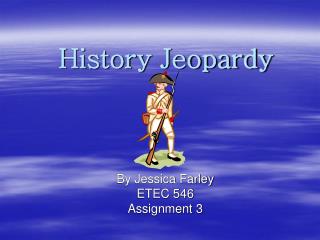 History Jeopardy. By Jessica Farley ETEC 546 Assignment 3. American Revolution. Politics for $100. This document signed in 1763 by King George III of England prohibited any English settlement west of the Appalachian Mts. Politics for $100. Answer: What was the Proclamation of 1763?.

Jeopardy - . choose a category. you will be given the answer. you must give the correct question. click to begin. music.

JEOPARDY - With your host. jeopardy. jerry zupan. at pvhs. jeopardy!. history of the world of forensics. you wrote what?.

AMERICAN HISTORY - . “ i won because i learned!”. american history. articles of confederation jeopardy!. articles of

Dating Jeopardy - . rdvic healthy relationships. dating jeopardy. dating $100. how much of your time should you spend

Grade 10 History – World War 1 Jeopardy - . the name of the boats that collided in the harbour. what are the mont-blanc